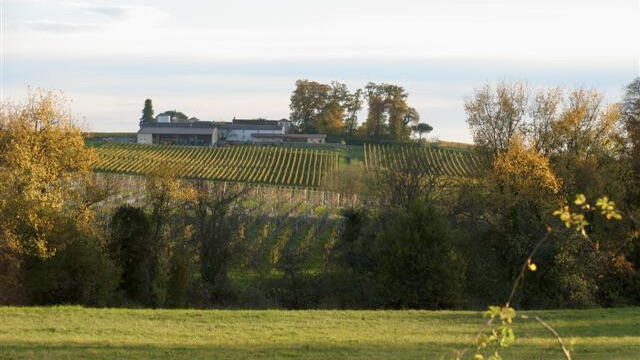 This "Grand cru classé" sits on one of the highest hills of Sauternes, and dominates the Ciron river valley. Thus, it was called Lamothe-d'Assault until 1814. This vineyard has had a troubled history, with many different owners. It was even split into several holdings. The largest part was acquired by Philippe and Jacques Guignard in 1981.

These winemakers have built a solid reputation as fervent perfectionists. Their wine cellars reflect their enthusiasm : respect for tradition, attention to detail, the quiet mystery of winemaking, then full of life when the golden nectar is finally poured into a glass. They have created their own style, and their wine is complex, well-balanced, fruity and fragrant.

The vineyards of Chateau Lamothe-Guignard is divided in two different soils, most important, is located on several "plateau" with gravelly soil, and the other is one of the best Sauternes' gravelly and chalky soil facing north and north west's Ciron's valleyl's slopes. Ciron is the river which gives this soil's climate and brings "noble rot" required for this wine's elaboration.

In the Sauternais, grapes'concentration results from Borytis Cinerea, also called "noble rot". This mould grows on grapes and pumps water out of berries to condense sugar and flavors Grapes are picked in several times to select only berries enough condensed. Then, berries are traditionally turned to wine in oak's barrels.